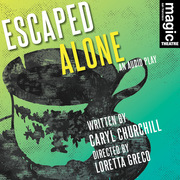 SAN FRANCISCO, CA (October 19, 2020) – Magic Theatre (Sonia Fernandez, Interim Artistic Director and Kevin Nelson, Interim Managing Director) is pleased to announce that Caryl Churchill’s ESCAPED ALONE, directed by Loretta Greco, will be released as an audio play. ESCAPED ALONE will be available to stream between October 19 and November 15, 2020. Tickets, priced at $10, may be purchased on Magic’s website MagicTheatre.org, or by phone at (415) 441-8822, beginning on Monday, October 19.

“We hope that you will enjoy the linguistic virtuosity, dry humor and prescient genius that is Caryl Churchill -- a writer who has been innovating and exploding the theatrical form for five decades,” said Sonia Fernandez, Interim Artistic Director. “When we planned the season, we were thrilled to bring Churchill’s work to Magic for the first time and center four mature women on our stage -- we had no idea how timely this play would feel. ESCAPED ALONE conjures and represents the human need for connection, for storytelling, the yearning for and comfort in each other inside of a cataclysm. We are so pleased to offer ESCAPED ALONE as an audio play and share its message of resilience in the intimate space of our listening.”

In ESCAPED ALONE, three old friends and a neighbor spend a summer of afternoons in their English backyard. Entwined histories, laughter, and song abound over tea and catastrophe.

*Member of Actors' Equity Association, the union of professional actors and stage managers.

+Member of Screen Actors Guild and the American Federation of Television and Radio Artists.

RSVP for Escaped Alone an Audio Play to add comments!