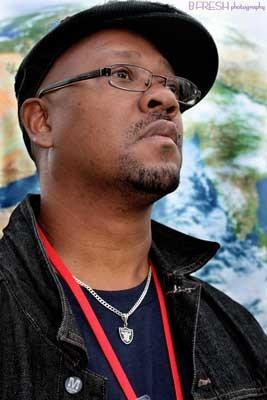 Davey D is a Hip Hop historian, journalist, deejay and community activist. He's been down with Hip Hop since 1977 in the Bronx where he started out as an emcee for two crews; TDK [Total Def Krew] out of Co-op City and the Avengers out of the Marble Hill Section of the Bronx. Later Davey D came out to Cali to go to school at UC Berkeley and started deejaying in the Bay Area. His mobile deejay work and community activism eventually lead him deejaying at radio stations including KALX, KPFA and later KMEL Davey D is a proud member of The PROs Record Pool where he served as director for several years in the late 80s -early 90s. He is also a co-founder of the Bay Area Hip Hop Coalition [BAHHC] Davey D is also a member of the Bay Area Black Journalist Association [BABJA] Currently he's the webmaster for what is considered one of the oldest and largest Hip Hop sites on the web Davey D's Hip Hop Corner-- which can be found at www.daveyd.com . The writings on his website are frequently referenced and quoted by journalists, scholars and professors and fans from all around the world. He writes for numerous publications and magazines and puts out a popular Internet newsletter called the FNV Newsletter which has a subscriber base of 100 thousand people. His newsletter like his website is also frequently referenced and quoted. Earlier this year [2002] Davey D launched another newsletter called HHPN [Hip Hop Political Newsletter]. He's been featured in documentaries, magazines, newspapers,videos and TV news shows like; Rap City Rhapsody, CNN's Talk Back Live, ABC's Nightline, Australia's Lateline, BBC Radio, Internet Cafe, Computer Chronicles, BET Television, VH1 Television, Soul Beat TV, KRON TV, KTVU TV, Bay TV, KPIX TV, KBHK TV, The Tavis Smiley Show, The Laura Flounders Show, E-40's Charlie Hustle the Blueprint of a Self-Made Millionaire, 2Pac'sThug Angel documentary, Straight From The Streets documentary, Jahi's Redefinition documentary, Impact Magazine, Radio Facts Magazine, Rollingstone Magazine, Washington Post, The NY Times, The NY Post, Oakland Tribune, USA Today, The San Francisco Chronicle, The Guardian Magazine [London], The Vallejo Times Herald, The SF Bay Guardian, Vibe Magazine, Stress Magazine, Redeye Magazineand The Source Magazine to name a few. Most recently he was featured on the cover story of Urbanview Newspaper here in Oakland. He was also profiled in the January 2003 edition of The Source Magazine as being one of the Top 10 most Influential people in the country when it comes to dealing with Hip Hop and politics. In 2000 Davey D was nominated by the Bay Area's City Flight magazine as one of the Bay Area's Most Influential African Americans. In 2001, Davey D was voted by the East Bay Express Newspaper as the Best On Air Personality in the Bay Area. The daily radio show he co-hosts, Hard Knock Radio was voted Best Radio Show in the Bay Area Davey D is originally from the Bronx and now a native of California. He graduated from UC Berkeley. Davey D also pens a Hip Hop/Political column for the San Jose Mercury News. Davey D also hosts a weekly Hip Hop/Political TV talk show on Oakland's Soul Beat television... Davey D sits on the advisory board for civic organizations like Black Youth Vote as well as Rock the Vote. Davey D was also the guest curator for the Rock N-Roll Hall of Fame Hip Hop Nation Exhibit when it came to San Francisco's Yerba Buena Center in June of 2001. Davey D has been a featured speaker at high schools, universities and community centers throughout the country. He speaks on topics ranging from Hip Hop to Politics to bridging the Digital Divide.