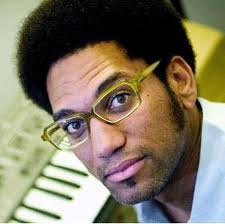 King Britt is a producer, composer, performer and curator of electronic music.

As a producer/composer, he fuses his knowledge of music history from many cultures and genres with electronic compositions, which redefine and re-contextualizes the past into the present. This is best shown in his work for Preservation Hall’s release King Britt presents Sister Gertrude Morgan, which combined, the gospel evangelist’s vocal recordings from 1970 with contemporary composition. This recording went on to penetrate the pop culture divide, by appearing in Michael Mann’s Miami Vice and HBO’s True Blood tv show, who’s soundtrack was nominated for a Grammy. It was this and many other projects from his vast catalog that helped him receive the Pew Fellowship for Composition in 2007.

He has remixed and produced many diverse artists including Miles Davis, Curtis Mayfield, Radiohead, Alison Moyet, Everything But the Girl and Chic, as well as scoring commercials for Rolex and L’oreal Paris.

As a performer, King is best known as one of the top globetrotting dj’s in the world. From cutting his craft as the wax poetic for the Grammy Award winning Digable Planets to traveling solo to different cities and countries, bringing cultures together through his eclectic taste and live improvised dance/experimental sets.

In addition to the dj sets, he brings many projects from studio to the stage environment.

These include, Sylk130 Collective (which sold over 500k copies), Saturn Never Sleeps and The Sister Gertrude Experience, performing in spaces as diverse as The Whitney Museum, The Corcoran Gallery and Winter Garden in the NYC Financial Center. King has graced the stage at festivals well, such as Kernel Festival (Italy), Moogfest (Asheville) , Glastonbury (UK), River to River (NYC), Camp Bisco (upstate NYC) and Voodoo Fest (New Orleans).

As a curator, he has done events for the Institute of Contemporary Art in Philadelphia, Knitting Factory NYC, The Getty Museum and a residency at The Painted Bride Arts Center, bringing electronic music artists into special projects and settings that they normally are unaccustomed and creating new work.

Recently remixing Merideth Monk, Saul Williams and King Sunny Ade. King continues to be an important force in the shaping of contemporary music.

He is currently working on Dumi Songs with Tendai Maraire of Shabazz Palaces, that take the historic Zimbabwe recordings of Tendai’s father Dumi Maraire, the master of the Mbira, and combines them with contemporary composition and arrangements. Set to be released in 2013 with a live multimedia experience to accompany it.