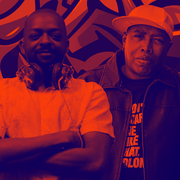 Nappy G is a founding member of the Grammy Nominated band Groove Collective and the creator of his own DJ style, FUNKY PASSPORT.  Nappy G was a longtime NYC resident, where in addition to forming Groove Collective he was a founding member o the internationally booked DJ party Turntables on the Hudson. He has performed around the world and here in the Bay as a DJ, Percussionist and MC with his own projects and a s a featured guest with many others. He returns to the Bay to shake asses and move hearts and minds!  He is teaming up with Grammy Nominated Bay Area phenom Soulati.

Together, Nappy G & Soulati are putting together a Funky night of music that will interweave DJs & MCs with Looping Stations & Live instruments.  They will cross so many musical genres, it defies any classification other than Pure Music. We just promise, it will be Funky!

Joining them is the young San Francisco Producer and Multi-Instrumentalist, The D3, who you will be hearing a whole lot more of.   Opening the show are JazSFunk up-in-comers, DangerAte!

Candice Antique Davis, Jayme Brown & N'Gala McCoy of Antique Naked Soul will be singing as will hot up and comer Lil Flower Nasti.  Also performing will be MC Z Man.

Expect there to be more very special guests!

Tracy Cruz is now a member of True Skool Network
4 hours ago
Welcome Them!