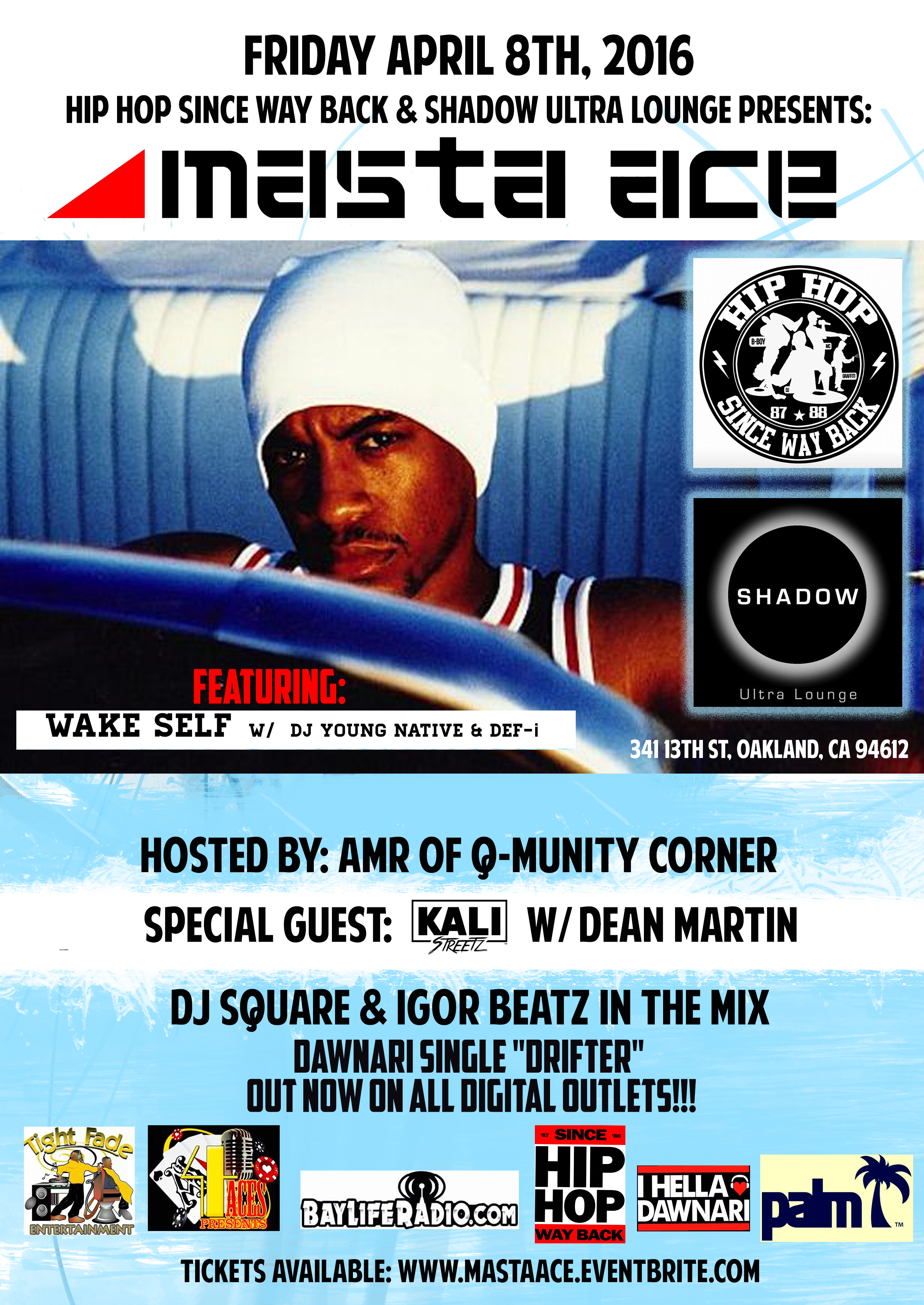 In conjunction with Q102 FM's Q-Munity Corner, this will be an evening filled with awesome talent and that feel good Hip Hop.

Wake Self w/DJ Young Native & Def i out of Albuquerque, NM will also be performing songs from the new album Malala

Masta Ace made his recording debut as on the Hip Hop posse-cut "The Symphony", along with fellow Juice Crew members Craig G, Kool G Rap and Big Daddy Kane, released on Marley Marl's In Control album. The album also featured two additional Ace tracks, "Keep Your Eyes on the Prize" and "Simon Says". In 1989, he released his first solo single, "Together" b/w "Letter to the Better". His debut album, Take a Look Around, was released through Marl's Cold Chillin' label in 1990, featuring production from Marl and DJ Mister Cee. The album featured two minor hit singles in "Music Man" and "Me & The Biz", the latter being a track with Ace's impersonation of Biz Markie, rather than a duet as previously thought the song would be.
Continued in detail at https://en.wikipedia.org/wiki/Masta_Ace

It’s nearly impossible to describe the intense commitment and passion Wake Self has for hip-hop. Since the beginning of the new millennium, Wake has played an integral role in Albuquerque’s hip-hop scene, but now his sights are set on the world. With two European tours under his belt, he’s just begun to scratch the surface of what he can do with his music. For the past decade, he has worked tirelessly to establish himself among the hip-hop elite. From work with his hip-hop band, Zoology, to his recent solo ventures, Martinez always has both hands in hip-hop.

Walt Liquor was born and raised in the San Francisco Bay Area. In his short time on this planet, he has played many roles in the music scene. As the artist/ producer, Eclipse 427, he was instrumental in the formation of the Bay Area indie hip­hop explosion of the late 90s. The foundation he helped to lay became the platform for artists like Murs and, The Grouch of the Living Legends, Hobo Junction, Zion­I and scores of others.Continued in detail at http://waltliquor.com/about/

Complemented by catchy and compelling visuals, the hip music video for “Gotta See It Through” marks Gino White’s stunning new dropPulaski, TN — June 17th, 2022- Back with a stunning new music video, Gino White is taking over the Hip Hop world with smooth and powerful vocals, set against rich and vivid visuals. A dynamic new release, “Gotta See It Through” features contemporary artist Jayda B, and marks just the first drop from the EP, ‘Dark…See More
13 hours ago
0 Comments

Sparky Flinstone is a reformed simp and current leader of the LBYF movement. His ex-girl said he had no power and nicknamed him M&M (Minute Man) Peenut. M&M thought life was over until he met Einstein. Einstein put M&M on when he invented the Freak Key. This key would change M&M’s life and help him find a good wife.The bible says, “He who finds a freak…See More
Tuesday
0 Comments