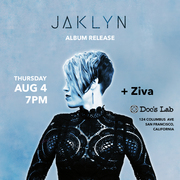 JAKLYN is a bold singer and songwriter who has always had a vision for her own original, soulful sound that would fuse together her many influences. She launched a solo music project so she could capture exactly what was in her mind, incorporating elements of soul, pop, jazz fusion, electronic, downtempo, hip hop, and rock. After several years of writing and recording, she has emerged with an impressive debut album that showcases her creative songwriting and reflects the different facets of her artistic identity.

The project defies boundaries of both genre and geography. For the production, JAKLYN tapped the talents of Erik Rico, a versatile, multi-instrumentalist based out of Austin, Texas. Rico has written and produced music for hip hop and soul artists like Jurassic 5, Planet Asia, and Ladybug Mecca (Digable Planets), and has also made several of his own indie soul albums. They collaborated remotely to form JAKLYN's 13 songs into an eclectic, dream-like journey of a “grown up girl” navigating through modern society. The album also benefits from tasteful contributions by jazz pianist Kit Taylor, who JAKLYN met while living in her native city, Portland, Oregon.

The album's title, That One Girl, is a nod to independent women who resist pressures to conform, and JAKLYN's expression ranges from fierce to vulnerable. Her soulful vocals mesh flawlessly with every flavor of music, as the album transitions through R&B, electro pop, ambient, nu jazz, and alt-rock styles. The surprising addition of a minimally produced, downtempo-infused pop ballad at the end of the album further demonstrates JAKLYN's range as a songwriter.

JAKLYN is an exciting new Bay Area artist that is not to be missed. See her perform the songs from her debut album for the first time at Doc's Lab, joined by some of the Bay Area’s finest musicians.

North Carolina titan drops off 11 hits featuring Kurupt, Kxng Crooked & more https://www.youtube.com/playlist?list=PLqYmEGUOCCfW_nkP5eX5A9PK1iAFTowJ0 Jody Lo has proven to be one of the most promising artists out of Winston Salem and possibly the entire North Carolina. After a flux of consistently artistic releases since 2018 we finally get the first official Jody Lo album and the overall project is FIRE.…See More
yesterday
0 Comments

North Carolina titan drops off 11 hits featuring Kurupt, Kxng Crooked & more https://www.youtube.com/playlist?list=PLqYmEGUOCCfW_nkP5eX5A9PK1iAFTowJ0 Jody Lo has proven to be one of the most promising artists out of Winston Salem and possibly the entire North Carolina. After a flux of consistently artistic releases since 2018 we finally get the first official Jody Lo album and the overall project is FIRE.…See More
yesterday
0 Comments