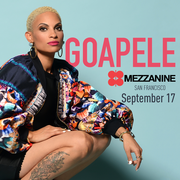 Goapele (pronounced gwa-puh-lay), which means “to move forward” in Setswana has been doing just that, moving forward and making her presence felt in the music industry since 2001 as an American soul and R&B singer/songwriter.
Goapele’s upbringing in her hometown of Oakland, California combined with ethnic influences from her South African father and New York-born Israeli Jewish mother have created a unique artist with a passion for her music and her community. Once called the “spiritual love child of Sade and D’Angelo” by Rolling Stone magazine, Goapele has both a sensuous and serious voice that is making a difference in the music world by blending genres including jazz, soul, and hip-hop, infused with her own poetry.
Following her time getting an education at Berklee College of Music, Goapele debuted her musical talent with a self-released album Closer in 2001. At its peak, Closer was #63 on Billboard’s Top R&B/Hip Hop Albums chart. This would not be her only taste of the Billboard ranks. In 2004, her first nationally distributed album, Even Closer, reached #24 on the Billboard Charts for Top Independent Albums. Her other Billboard accolades include her 2006 album, Change it All, which was both #32 on the Billboard Top R&B/Hip-Hop Album chart and #2 on the Top Heatseekers, while the single “First Love” reached #18 on the Hot Adult R&B Airplay.
Goapele’s love and passion for the world pours out into her music and her “smoky and sensual” voice, as described by Billboard magazine, is sure to make your day.

RSVP for Goapele at Mezzanine to add comments!