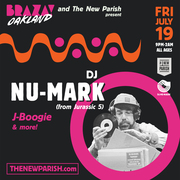 For the past 10 years, BRAZA!has taken the city on a music trip around Brazil and the rest of the world, and now it's time for Oaktown to get a taste of it as we depart to a new journey: BRAZA! Oakland. Featuring a veteran member of the legendary hip hop group Jurassic 5, DJ Nu-Mark, the Bay Area producer, and DJ, J-Boogie, and many other local DJs, this first edition of the East Bay party will be a destination not to be missed.

The party goes way beyond the basics to mix all the most current baile funk, hip hop, reggaeton, trap, samba, soul, disco, Latin beats and even remixes from the African diaspora. Started in 2009 by 4 DJs and 1 musician, BRAZA! has given thousands of dancefloor enthusiasts the best tropical DJ sets by bringing current and classic world-class DJs behind the console. Names like Sango, Nuts, Spinna, Marcelinho da Lua, Lefto, Maga Bo, Nu-Mark, Sabo, and so many local names, were often in the lineup.

Tune in for one of Young Pharaoh’s best breakdowns. He is joined by Bro Sanchez, Bobby Hemmit, and Bro Panic. Watch the explosive video below on Dr. EnQi's Youtube Channel.See More
22 hours ago
0 Comments