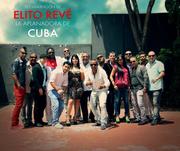 Orquesta Revé, commonly known as "El Charangon", is a music legend in Cuba and is famous worldwide. The Orquesta Revé was founded in 1956 by
Elio Revé, a brilliant musician from Guantanamo who died in 1996. Today it is his son, Elito Revé, who ensures the musical direction of the band. Many of the musicians and singers currently at the forefront of the Cuban music scene have been at one time or another members of Orquesta Revé, and it is probably for that reason that the
band was given the nickname of the "Mother" orchestra.

In the more than half-century of its existence, the Orquesta Revé has been not only an incomparable orchestra of popular dance music, but also a laboratory from which other orchestras originated, such as Ritmo Oriental, Los Van Van, daN Den, the 440, Pupy, Chucho
Valdes, Yumuri and others. Orquesta Revé has also been the source of other innovative and successful musical formulas as well.

Gillie Da Kid just dropped a hot new mixtape titled "Who Got Game Vol. 2". The rap star is doing a series of mixtapes promoted by Trillest Entertainment featuring the hottest artists all around the world!Check out this dope new mixtape…See More
15 hours ago
0 Comments