Chali 2na + Cut Chemist + Grand-O at The Chapel in SF 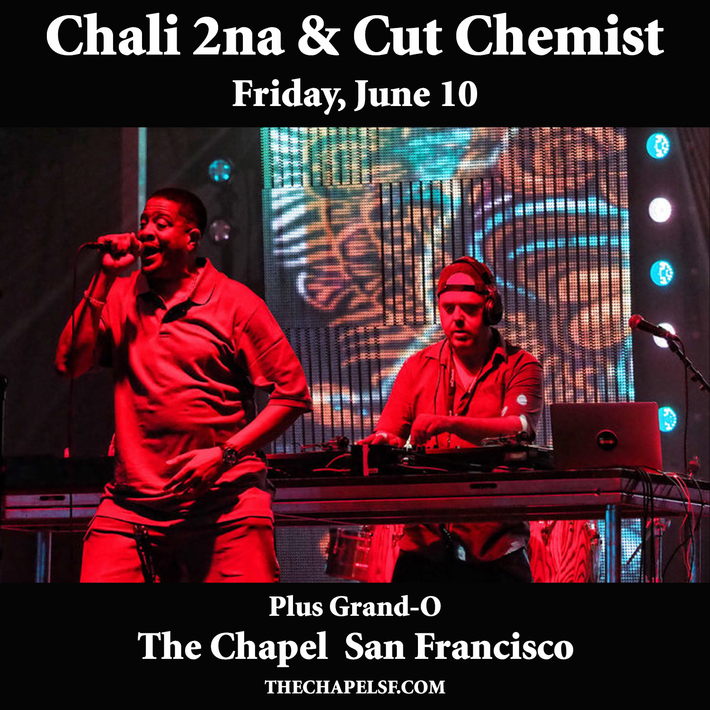 Chali 2na and Cut Chemist have been inseparable for 35 years. It all started in 1987 when they formed their first group UNITY Committee just a couple years after Chali move from Chicago to Los Angeles.

In 1994 they combined forces with local rap group Rebels Of Rhythm to form Jurassic 5. Although J5 was in full swing making music and doing shows, Chali and Cut also were founding members of the fusion Latin group Ozomatli in 1995. Since then the two have been busy with both groups and still managed to find time to separate and embark in solo careers on the side. Cut Chemist went on to do remixes and features for such acts as DJ Shadow, Less Than Jake and Blackalicious. Chali also explored his rap prowess with such acts as Roots Manuva, Lyrics Born, Slightly Stoopid and Galactic just to name a few. Separately they also landed solo deals with Interscope and Warner Brothers.

For the last three years they’ve been doing a special collaborative performance that tells the story of their lives in music together. The catalogue is as endless as the time they spent together creating over the years.

Grand-O mixes style with lyrics in a way no other artist has before. His new age sound, with his classic twist of word play, along with some soul sprinkled on top, truly make him an eclectic force in the game. The San Francisco born native, is a direct reflection of the melting pot of what is the Bay Area. The young artist serves as the bridge between where the art of hip hop has been and where it is going.

RSVP for Chali 2na + Cut Chemist + Grand-O at The Chapel in SF to add comments!