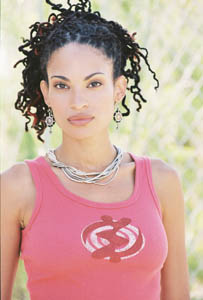 Goapele brings an infusion of fresh energy and a classic, yet new sound to R&B music with her sophomore set, Change It All.

The Oakland, California-based songstress broke onto the Bay Area music scene in 2001 with her ethereal EP, Closer, and the follow-up full length album, Even Closer. Released on her family-owned record company, Skyblaze Recordings, the album’s mix of soulful grooves and thought-provoking lyrics introduced the world to a multi-faceted artist and songwriter, known as much for her social and political activism as for her lush romantic ballads.

“I grew up,” Goapele explains, “inspired by a tradition of soulful singers like Stevie Wonder, Nina Simone, Bob Marley, and Miriam Makeba, people who created timeless music and positive change in the world. I’m also part of the hip hop generation, and my influences continue to grow, so my music has become a blend of many musical traditions.”

Critics from Rolling Stone, Billboard, Essence, Vibe, and a host of others, hailed the songstress as an emerging artist to watch and heralded Even Closer as an album that was ahead of its time. The inspiring title track, “Closer,” notched 1’s on radio playlists from San Francisco to LA to DC to Baton Rouge, and as of August, 2005, four years after its initial release, was 1 at the two largest urban stations in Detroit.

Goapele followed up the release of her album debut by hitting the road and taking her serene — yet inspiring — sound to the masses, both stateside and abroad. Time and again, the singer wowed sold-out crowds with her emotionally-powerful songs, energetic spirit, and electrifying shows.

While Goapele garnered the support of music critics and fans, a host of fellow musicians and celebrities–including The Roots, Talib Kweli, Magic Johnson, Prince and Stevie Wonder–came under the spell of her music, style and sensibility. “I’m very excited to get the support of artists I’ve long admired,” she says.

For her new album, Goapele returned to her Bay Area roots to craft an artistically challenging sophomore set inspired by her recent experiences both in and out of the industry. The album was recorded largely at her Skylight studios in Oakland with a combination of old friends Jeff Bhasker, Mike Tiger, and Amp Live, and fresh collaborators like the production team Sa-Ra Creative Partners (Jill Scott, Bilal), veteran producer Linda Perry (Pink, Christina Aguilera), Bay Area hip hop producer Bedrock (E-40, the Team) and fellow soulster Dwele.

“It was really important to me to work with the people who helped me with my first album,” Goapele says of her long-term and frequent collaborators. “We know where each other is coming from, so there’s already a strong foundation to create from. And we’ve all come along way since we made “Even Closer”. Jeff [Bhasker], for example, co-wrote and produced the title track of The Game’s album, ‘The Documentary,’ last year, so I was really excited to come back together in the studio with them and share our new skills and experience.”

The result is a collection of love songs and politically and socially inspired songs that remain true to Goapele’s firmly planted soul roots while allowing her to branch out in a number of exciting, new directions. Songs like the emotive “Darker Side Of The Moon” and “Love Me Right,” with its electro-pop funk, show Goapele taking aesthetic risks while staying true to her signature sound.

“What I am happy about was that I don’t feel like any of the collaborations were forced,” says Goapele. “They were connections that were already there, and we were just waiting for the right time to work together.”

Goapele collaborated with Linda Perry on “Darker Side Of The Moon,” a ballad that reflects her ability to travel far beyond the borders of traditional R&B while strengthening the core values of sweet soul music.

“I met Linda at one of my shows in LA,” says Goapele of the collaboration with Perry, “and we talked about the possibility of working together. Although I was a fan of her music, I really didn’t know how our styles would mesh, but I’m really proud of what we created together. ‘Darker Side’ was inspired by Pink Floyd, who I had recently become a fan of and had been a favorite of Linda’s for years.”

The granddaughter of German holocaust survivors and South African grandparents who lived through apartheid, Goapele knows the importance of giving back time, energy and resources to the community and the planet. “I’ve been involved in community organization since I was 10, so it’s naturally integrated into my music. One of the reasons I wanted to be a songwriter in the first place was so I could sing lyrics that I believed in and that come from my heart. I draw from my own experience and the experiences I’ve watched others go through. I want my music to truly represent me, instead of trying to fit stereotypes that women in this industry are encouraged to fit into.”

The title track, “Change It All,” started with a song idea,” says Goapele. “I was feeling disempowered and frustrated with the people who were elected in 2000, and then re-elected, and frustrated about the disappearing support for music and art and resources that are being taken away from our local communities in order to fund a war that many of us don’t believe in.”

In the spirit of Goapele’s interest in positive change, she and Skyblaze founded an online community that shares its name with her album. ChangeItAll.org presents Goapele’s musical message, highlights political and social change-makers, and provides a forum for Goapele’s fans and others to network and create ways to promote action, creativity, courage and positive growth for people and communities everywhere.

“In talking to the team at Skyblaze, we started thinking, ‘What if we used this opportunity to create a tool for other people to connect, ‘” she adds. “So, instead of looking at what’s wrong in the world, let’s look at what changes are already happening and use it as a way for people to organize around those things.”

For a singer whose name means ‘to move forward’ in Sitswana, a South African language, her new album, Change It All, proves that enlightened change can be a positive force in the world of music and beyond. Note: Goapele is pronounced Gwa-pa-lay.