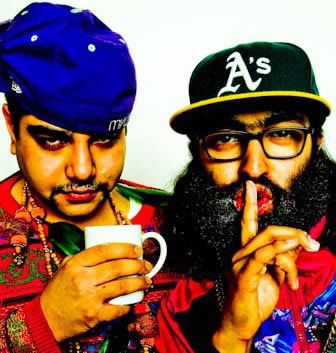 THE NEW YORK TIMES:
…Their sloppiness is a mask for detailed, affectionate hip-hop parody, name-dropping KRS-One and Asher Roth as easily as W.E.B. Du Bois and the literary critic Gayatri Chakravorty Spivak… a blend that inspires questions like this one in a recent interview in the Village Voice: “Is this a joke that everyone thinks is a graduate thesis, or vice versa?” …Das Racist’s lack of piety has become an aesthetic of its own, with songs that are as much commentary on hip hop as rigorous practice of it.
+
Das Racist’s rhymes are smart and funny and delivered with a lazy loquaciousness that’s instantly appealing.
+
The rap group Das Racist proved it’s not a novelty act by shouting its way through smart, allusion-slinging songs that grapple with, among other things, identity politics and brand recognition.

PITCHFORK (BEST NEW MUSIC)
There’s precedent in the hyper-referential raps of Beastie Boys and MF Doom as well as the abstract-gone-mainstream wordplay of Dipset and Lil Wayne, but Das Racist are a singular act. Google and Wikipedia get several shoutouts, and it makes sense since everything under the sun is fair game for these guys, but they never rhyme for the sake of riddlin’. The lyrics themselves have an orderly and logical nature about them, pop culture crosswords that draw connections between completely unrelated objects. Listening to their music doesn’t require deep cultural or musical knowledge to enjoy it– it’s pretty damn enjoyable purely as pop– but you’ll get more of a charge from it the more often you decode it.

THE NEW YORKER
You could call them hip-hop punks. But all the tools required to rattle people are already inside the genre; there just aren’t that many rappers waving their box cutters around so freely
+
This kind of dumb fun is an appropriate supplement to what Das Racist describes as its “deconstructionalist” approach. If the band members want you to think about the ways that skin color can affect consciousness, they also don’t mind if you go ahead and party. They rap over a variety of tracks, mostly made by producers outside the group, and the music is rarely difficult or abrasive.

MTV:
Das Racist are a Brooklyn/San Francisco “zip hop” duo who rap about stuff like fast food restaurants and Hugo Chavez over hyphy beats that sound like they were cooked up in about three minutes on a thrift-store Casio. which is to say: they’re pretty amazing.

NEW YORK MAGAZINE:
Sawing the legs out from under hip-hop as they celebrate it.

NEW YORK PRESS:
I suspect it’s only a matter of time before someone at The New Yorker tries to posit lines like “When i say call, you say response” as some sort of semiotic deconstruction of the conventional elements of hip-hop, and i’d like to call that person out in advance if possible. Das Racist is to be taken with a smirk on one’s face and both hands in the air.

PITCHFORK:
“Combination” retains its inner Cheech and Chong and still seems leagues smarter for it. Sure, it’s a one-idea track, but that idea somehow becomes more endearing as it rolls on, and in the end this is the song you’ll hear that you’re most likely to immediately turn around and want to share with someone, good or bad. After a dozen listens last week, i’m still siding with good. 8/10: BEST NEW MUSIC

PLAYBOY.COM:
…Together the guys make music that’s equal parts hip-hop and Cheech & Chong. No, check that. They have a wicked sense of humor, yes, but their music is no novelty act.

DECIDER:
The answers lie in the interstices: the banter between songs, the way Kool A.D. and Himanshu embrace each other while they rap, the crowds vacillating between dancing and laughing.