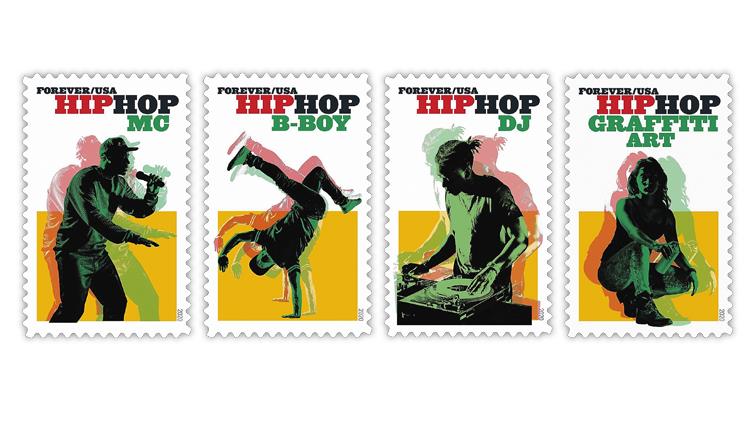 The four original elements of hip-hop culture are portrayed on four new forever stamps from the United States Postal Service.

The nondenominated (55¢) stamps will be issued July 1 in a pane of 20. Because of the ongoing COVID-19 pandemic, there will be no first-day ceremony on the issue date.

“A dynamic youth culture emerged in the mid-1970s at playgrounds and community centers in African American and Afro Caribbean neighborhoods in New York City,” according to the Postal Service. “The term ‘hip hop’ refers to four creative activities that developed together: rapping, DJing, break dancing, and graffiti art. Even before hip hop music hit the radio airwaves in 1979, teenagers developed hip hop for neighborhood fun, for storytelling and to speak out about social issues overlooked by mainstream society.”

The four stamp designs feature photographs by Cade Martin, each depicting an individual involved in one of these four elements.

In a Nov. 26, 2019, blog post for artist representative Heather Elder, Missy Hunter wrote about Martin’s work with the Postal Service and the individuals in his stamp photographs.

READ THE FULL ARTICLE AT LINNS.COM

BluejayWangteam is an artist from Victorville California probably the most developed artist out of his city but let’s not forget unique his sound is way different from the average but his grind is relentless be prepared to see more of him from here on outConnect:…See More
10 hours ago
0 Comments

One of the newest additions to Spice 1’s label Thug World South, Real Smokesta has that deep rooted southern sound.  This next song from Texas native has a message alongside it.  Bringing a little r & b, a little country, and a whole lot of passion as per usual, Real Smokesta grasps this by the wheel, and drives.  The song speaks against Domestic Violence, and not…See More
15 hours ago
0 Comments

Joey Phantom reppin Louisville, KY drops off the Lyric video to the anthem of the season "Summertime" via Phantom Music LLC. We know you're going to vibe along, so we want to make sure you learn the words and don't miss any of his clever wordplay. Continue to support the campaign and following the movement. We will make sure to keep you updated. “Summertime" is a whole mood and you can stream it on ALL digital platforms. Follow, like, comment, stream and share, we appreciate all the love and…See More
yesterday
0 Comments

If you are looking for a gritty sound, yet with dreamy emotion than "Too Much Money" from Str8 Drop Allstars artists Dougie Jay ft Teflon Mark is the perfect single for you. Baton Rouge stand up because this powerhouse duo delivered a street anthem that is sure to keep the crowds rocking and begging for more.Click Here to Download Dougie Jay ft Teflon Mark "Too Much Money" DJ Service Pack…See More
Saturday
0 Comments