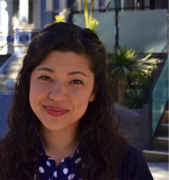 Literary Pop, the most exciting new spoken word extravaganza in which great writers, poets and comedians write about pop culture, is taking over Writers With Drinks for the month of March. Featuring superstar host Wonder Dave!

Oakland based Latinx writer, MK Chavez is the author of several chapbooks including Mothermorphosis and Dear Animal, (Nomadic Press) which received the 2017 Pen Oakland Josephine Miles Award. Chavez’s poem The New Whitehouse, Finding Myself in The Ruins, was selected by Eileen Myles for the Cosmonauts Avenue 2017 Poetry Award. Chavez is also co-founder/curator of the reading series Lyrics & Dirges and co-director of the Berkeley Poetry Festival, a fellow with CantoMundo and a writer in residence at Alley Cat Books.

Maggie Tokuda-Hall has an MFA in writing from University of San Francisco, and a tendency to spill things. She splits her time writing for kids and for adults and her debut children’s book, Also an Octopus, has been called “wickedly absurd” and “a perceptive how-to” that will “inspire kids to imagine a story of their own.” Her debut Young Adult novel is due out in 2019. She also hosts the Drunk Safari podcast, which features animal facts as brought to you by drunk dilettantes of zoology.

Kelly Anneken is what happens when Kim Kardashian looks like Bette Midler and tweets like Roseanne. This Oakland-based funny person and all-around swell gal performs standup comedy and is a regular at the Punch Line San Francisco, Cobb’s and Rooster T. Feathers.

Natalia Vigil is a queer Xicana writer, multimedia curator, and big sister of six, born and raised in San Francisco. She is the proud co-founder of Still Here San Francisco, a performance and community dialogue centering the experiences of queer and trans people raised in the city and a 2016 Lambda Literary Fellow.

Amanda Muñiz English Lit. certified, side hustler, and amateur writer. Poblana turned immigrant at the age of eight. Writer of anecdotes, chismes, and made-up stories. Inspired by her parents, the migrant experience, and the land she has trekked over.

Sam DiSalvo is a San Francisco-based comedian. She performs all over the country and has been featured in SF Sketchfest. She’s the co-creator and producer of the monthly showcase More Fun at Blondie’s, the only Monday comedy show that features free cake. Sam;s style has been described as “brave” and “maybe too honest” by her mother.

Wonder Dave is a comedian and writer from Minneapolis, MN, now living in Northern California. He has toured the country performing at schools, cabarets, sci-fi and comic conventions, burlesque shows, strip clubs and bowling alleys. Dave is the co-host of the long running Oakland variety show Tourettes Without Regrets. He has been featured on the Risk Podcast and is a regular debater on the comedy debate podcast Nerd Rage: The Great Debates, and co-hosts Ring Awareness a podcast about Women’s Profressional Wrestling. Dave is also the mastermind of the show/podcast Literary Pop! Which gathers writers, comics and storytellers to share work about the pop culture that has influenced their lives.

Southwest, GA; based artist Koncious1 started writing music at an early age and that's the way he choose to express himself. Everything he raps about; he's either seen, done, or is doing it. No rap kap! Making Moves Untold Story pt.2 is the sequel to the first Untold story that goes into a little more detail of the life of Koncious1 in the present and past tense... His Story!--…See More
12 hours ago
0 Comments

If when you hear Hip-Hop and you automatically think “lack of substance”, think again. Musical Artist, Songwriter, and Producer 1Dru, is a multi-talented lyricist hailing from the small town of Altha, Florida. 1Dru was exposed to the love of music at just age nine, highly influenced by his harmonica talented grandfather. Around age 10, 1Dru began writing poetry and admits that the…See More
12 hours ago
0 Comments

East Coast Artist, Chris Cash releases the visual to his latest single, “Shark Bait”Chris Cash holds an energized delivery that drives his fans crazy and screaming wanting more. Redefining what it takes to be a top-notch entertainer along with his entire catalog of music, Chris Cash is a raw cut of musical greatness and compliments what it means to be a rapper. He is a renaissance man with an impeccable hustle destined to change the rap game one song at a time. Additionally, he is an…See More
13 hours ago
0 Comments