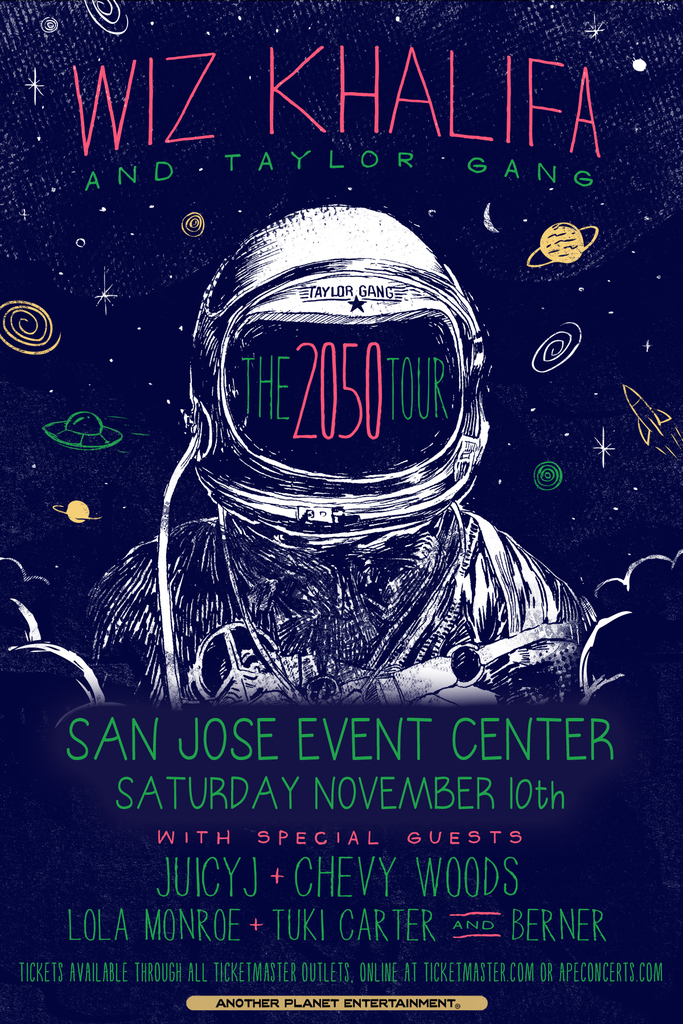 Please note that presale tickets are only available online. The general on sale begins Friday, September 14th at 10am.

Born Cameron Thomaz, but better known as Wiz Khalifa, the 24-year old Pittsburgh native took the rap world by storm in 2011 with the release of his 3x-platinum hit "Black And Yellow." The track later went on to become the unofficial anthem for the Pittsburgh Steelers and helped catapult Wiz to another level of rap superstardom. In March 2011, Wiz released his major label debut, Rolling Papers, which debuted atop Billboard's 'Top Rap' and 'Top R&B/Hip-Hop' charts and #2 on the 'Top 200 Albums' chart. The album has gone on to reach gold-certification and has spawned 3 multi-platinum singles; "Black And Yellow" (3X Platinum), "Roll Up" (1X Platinum), "No Sleep" (1X Platinum). Wiz also became a fixture on the road embarking on 3 major sold-out headlining tours this year. Wiz teamed up with rap veteran Snoop Dogg for a collaborative album, "Mac And Devin Go To High School Soundtrack," which features the platinum hit, "Young, Wild & Free (feat. Bruno Mars)." To top off an incredible year, Wiz was recently nominated for TWO Grammy Awards, in the "Best Rap Song" and "Best Rap Performance" categories for his breakout smash hit, "Black And Yellow."

Congrats to KEITH BULLOCK for winning a pair of tickets

Flori Da Don releases "Stay Out The Mix", which is a detailed message of how street life is no joke. "Stay Out The Mix" is another way if saying, "stay out of the streets", if you are not prepared to deal with its harsh realities, such as betrayal from loved ones, long jail sentences for drug crime offenses, and more. Flori Da Don briefly describes in third person how he just wants to share his gift with the world and “Stay Out The Mix”. Connect w/ Flori Da Don:Instagram:…See More
20 hours ago
0 Comments

‘Investigation’ is an astounding single that has fans begging for morePhiladelphia, Pennsylvania — All Gutz No Glory Productons LLC. Is one of America’s leading entertainment companies in 2022 today. Founded in 2019 by CEO Bernard ‘Nizzy’ Woody as a Full-Service Management, music publishing and entertainment company, the organisation has seen tremendous growth in the past 3 years and is now considered to be one of the most well-known names in the industry today.What has really gotten people…See More
Monday
0 Comments

Jamaal Saunders, professionally known as “Jay Shephard” was born and raised in Nassau, Bahamas, and was influenced by celebrated artists such as; Bob Marley, Bone Thugs N Harmony, Michael Jackson, and Gentleman. Jay has always sought to mirror his own artistry to the legacy such legends left behind! Surviving a traumatic life altering experience, Jay’s entire course of…See More
Sunday
0 Comments

"Freakiana" is the first Young Rob single this year and it's a pure dancefloor banger! An anthem for all the self-proclaimed freaks, "Freakiana" is Young Rob's gift to party aficionados far and wide. It’s a catchy, uptempo R&B song that projects the London star’s desire for women in poetry that is unapologetically explicit.Young Rob teamed up with NitroGetLive for…See More
Saturday
0 Comments