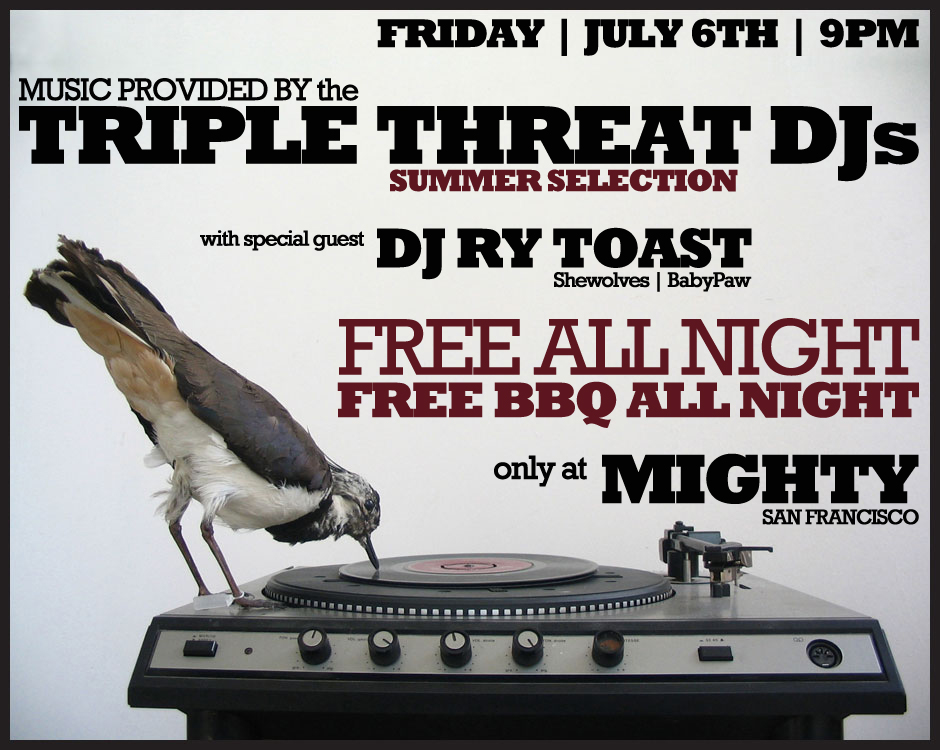 Before becoming a trio, the Triple Threat DJs, comprising of legendary DJs Shortkut, Apollo and Vinroc, all but conquered their genre. They were introduced to the art form as youngsters through mobile DJing and evolved into world-renowned turntablists. Triple Threat represents the future of turntablism, precisely because they’ve been so instrumental to its storied past. Though they have championship-level skills at scratching and beat-juggling they also know how to rock a party, produce music and create original compositions with two turntables. They are not just djs, turntablists, producers, musicians or club djs, they encompass all aspects.

DJ Ry Toast has been a certified rap nerd ever since she put a Tone Loc tape into her Teddy Ruxpin.  Toast grew up in Jersey and went to college in Vermont. She has been deejaying professionally since moving to San Francisco in 2007. Her musical selection represents a deep understanding of music, people, and how to get the party crackin'.  She is a true admirer of all things hip hop.

ALL EVENTS AT MIGHTY ARE 21+

Titled “WYSH,” C-ZO’s new drop is a beacon of inspiration, resilience, and grit and presents a visceral picture of life’s many strugglesClarksville, IN — An artist, songwriter, engineer, and producer, C-ZO is motivated to inspire and captivate audiences with this new release, “WYSH.” Having dropped for listeners on his official music platforms in October 2022, the new single is a testament to the memories and struggles the…See More
11 hours ago
0 Comments

Prince Amaho was born into a Royal family in Nigeria, West Africa. In the late 90´s, he moved to Germany pursuing his chances in the Music Industry against all odds. His first worldwide hit single “Rhythm in my Life”, with the Major Music Label BMG, paved the way for his notoriety in Europe.Working collectively with friends and Partners in the Music industry, Prince Amaho decided in 2009 to form the musical project “Soul Bros”, which has proven to be successful from numerous worldwide - Club…See More
17 hours ago
0 Comments

When life gives you a calling, it may take years before you understand why it's calling, why you’re the one chosen to give the world a gift you knew you had but wasn't quite sure it was for you. A lot of artists dive into the music world because it’s a trend but when music is your gift, it becomes the reason you stand out. Sometimes you must go through painful life lessons before you take that risk, but once you do it’s all elevator from there ask…See More
yesterday
0 Comments

Snellville, GA — Esounds has been producing for almost 10 year, working with artist in the Atlanta, Ga area. Esounds has built a team of producers, songwriters, and engineers to produce the best record.Esounds is rising in the music industry by collabing with multiple artist and releasing his own music. With Esounds talent of producing and finding talented artist he is able to help jump start artist career. Anyone can find Esounds’s music on all streaming planforms, and released music every…See More
Saturday
0 Comments