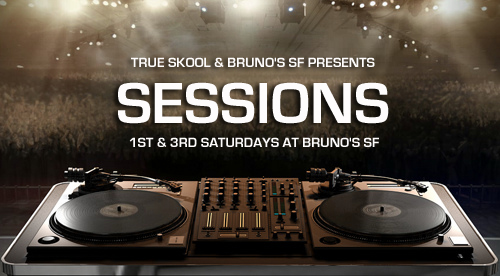 The San Francisco landmark event showcasing the Best DJs in the Bay Area spinning your favorite hits, classic hip hop, soul, funk, reggae and much more at Bruno's in the Mission District. Bruno's offers two rooms of music in an intimate classy setting!

ABOUT REN THE VINYL ARCHAEOLOGIST

As a bay area resident (by way of New York), Ren the Vinyl Archaeologist made his mark by curating top notch events featuring hip hop legends and emerging artists from the Bay and beyond. As a DJ, he has spun alongside pioneers such as Mixmaster Mike, Grandmaster Flash, Jazzy Jeff, Kool Herc, Afrika Bambaataa, Kool DJ Red Alert, Q-Bert, Cut Chemist, DJ Premier, DJ Bobbito, and Rich Medina. In addition, he shared bills with world-renowned artists such as The Roots, Erykah Badu, Lupe Fiasco, Wu-Tang Clan, Michael Franti, KRS-One, Lyrics Born, Pharcyde, and the list goes on. Ren is a professional party rocker who can put it down among the best of them with a vast arsenal of music to drop on any dancefloor, ranging from hip hop, reggae & soul to electro, house and breaks. Ren has appeared on numerous publications, such as the XLR8R, 7x7, SF Weekly & SF Magazine, to name a few.

A key player in the explosive US "tropical bass" scene, Deejay Theory has been shaking subs and moving bodies for over a decade. Born and raised in New England, Theory now lives and works in San Francisco, CA where he spends his days in the lab and nights in the club. He also contributes regularly to leading online Caribbean lifestyle magazine, OkayPlayer's LargeUp.com

Chuck D leads a host of rap stars in this account of Hip Hop’s origins. Their memories of growing up in 70s New York portray a divided city mired in crisis. Yet it was the most oppressed neighborhoods that fostered a creative spirit that spawned…
14 hours ago
0 Comments

​Being certified in anything means you have mastered the skill you worked hard to be the best at. To hustle is to grynd and to grynd is to be successful. So, when you think certified you think successful. In order to get there, you have to go through pain and struggles not everyone is prepared for.Laurel, Mississippi artist Shayne Kobayne has been pushing the envelope of grynders for years. This means everything he works for comes from the muscle…See More
15 hours ago
0 Comments

2 events by Editor's Pick were featured
19 hours ago

Skweeze Get’m Drops solo WOOFER-BANGIN’ Track On his birthday! Cresson, PA — Friday, September 17th, 2021 — Since the separation of long time partner ‘Cam’ he has been busting his butt to create top-notch tunes. The sound has never been so textured and animated. The track is available on all platforms, through WORLDSTAR’s Distribution it is sure to heat up the fans.September 17th, ‘Last Joke’ goes live on all platforms. It is one of many tracks that Get’m will be dropping over the next 3 years.…See More
yesterday
0 Comments

Brooklyn raised Cadillac Rah drops a hot new single “What She Wants” featuring Diop’s Chord. These two artists came up with the concept of the song based off of past relationships. Incorporating their pain into vocals and instruments, helped allow their audience to connect to the song. They wanted their lyrics to speak to everyone and hopefully enlighten people. The…See More
Monday
0 Comments