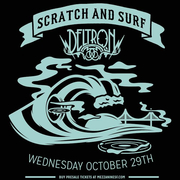 Come out and watch Deltron 3030 lay down a live soundtrack to a custom surf movie from legendary surf photographer Morgan Maassen. Also featuring Golden Age laying down a live track to the newest San Franpsycho surf movie featuring Andy Olive and Christian Rouzen. Proceeds from the benefit go towards our educational projects in Guatemala, Nicaragua & the Philippines.

Deltron 3030 is composed of a trinity of alt-rap all-stars: Master lyricist Del The Funky Homosapien, virtuoso turntablist DJ Kid Koala and super producer Dan “The Automator” Nakamura. Individually, they stand at the top of their respective musical disciplines; together, on the eponymous Deltron 3030, they warped space, bent time, transcended genre and blew minds, creating an album that still stands today as one of the most important records in the annals of underground hiphop. Critics called it a masterpiece — both timely and avant garde: “Exactly what you might expect from such a teaming: a wildly imaginative, unabashedly geeky concept album,” said AllMusic.com. “It’s not only one of the best albums in either of their catalogs, but one of the best to come out of the new underground, period.” Pitchfork called Nakamura the “poet laureate of creepy, oppressive beats,” describing the album as an “exciting” reimagining of “the future from the bottom up” that reveals Del as a “surprisingly acute social critic.” Now, over a decade later, they’re finally releasing the long-awaited followup to their debut — an album titled Deltron 3030: Event II.

P.U.S.H decides to let his newest release speak for itself.  He hasn't come with a new single in a very long time, and decides to bring in the OG Mike Jones with it.  The song lyrics speak on Makin It Happen, from getting out of the hood, to people hating, to making money.  The song has that Mike Jones southern Texas flare to it, and then P.U.S.H comes along with his…See More
5 hours ago
0 Comments