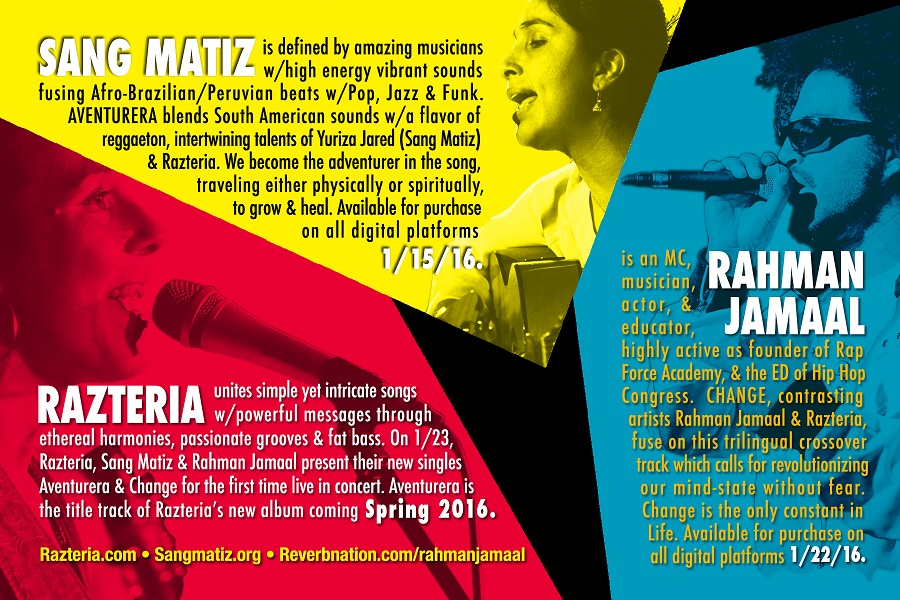 CHANGE, contrasting artists Rahman Jamaal & Razteria, fuse on this trilingual crossover world-hip hop-rock track which calls for revolutionizing our mind-state without fear. Change is the only constant in Life. Available for purchase on all digital platforms 1/22/16.

Sang Matiz has been performing for 6 years, fusing World and Afro-Brazilian/Peruvian beats with contemporary rhythms such as Pop, Jazz, and Funk. They've had the great opportunity to collaborate with various renowned Bay Area musicians such as: Jackeline Rago (Master Percussionist), Miguelito Martinez (Flutist/Composer), Silvestre Martinez (Composer/Percussionist), and Grammy Award-winner Braulio Barrera (Pacific Mambo Orchestra), among many others. In addition, they've had the pleasure of sharing the stage with national and international acts such as Jorge Santana (Malo) and Pete Escovedo.

Rahman Jamaal is a performing artist, emcee, musician, actor, and educator who first debuted in the 2003 Sundance Film Festival as the star of the movie "The Beat". He is highly active in the Bay Area as the founder of Rap Force Academy, and the nationally as the Executive Director of Hip Hop Congress. In 2014, he won the Lennon Award for Hip Hop in the International John Lennon Songwriting Contest (JLSC).

THURSDAY, FEB 3In honor of the late great record producer and rapper James Dewitt Yancey (aka J. Dilla), Dilla Fest 2022 brings together a line-up of hip-hop artists sure to make him proud. Headlining 2022’s event are Imani from the Pharcyde joined by Fatlip & Slimkid3 and Talib Kweli & Live Trio…See More
14 hours ago
0 Comments