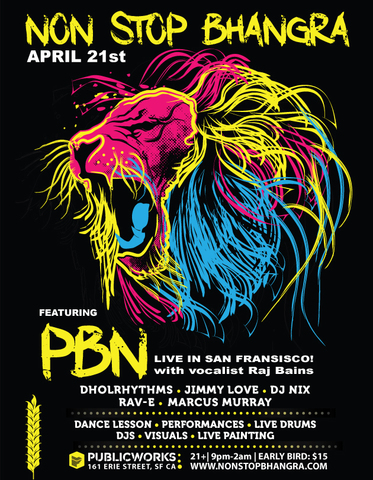 Non Stop Bhangra returns on April 21st with a special guest headliner PBN--UK born, internationally known, singer, performer, and producer whose contributions to the Asian music scene has been continuously recognized earning him prestigious awards including "Best Selling British Asian Single", "Best Album", "Best Music Producer", "Best Recording" and more. In addition, his record label, Playback Records has gone on to sign and mentor British chart topping Asian Artists which include the powerhouse vocalist and upcoming Bhangra star, Raj Bains who will be performing alongside PBN at Non Stop Bhangra. In the space of 2 years, they already have four official Number 1 singles in the Asian charts to their name.

The entire Non Stop Bhangra crew will be in the house to round out the night with dance lesson, dance performances, dj sets, live dhol drumming, visuals, live art, and more! One of a kind night only found in SF and voted Best Dance Party in the SF Bay Area.

P.U.S.H decides to let his newest release speak for itself.  He hasn't come with a new single in a very long time, and decides to bring in the OG Mike Jones with it.  The song lyrics speak on Makin It Happen, from getting out of the hood, to people hating, to making money.  The song has that Mike Jones southern Texas flare to it, and then P.U.S.H comes along with his…See More
yesterday
0 Comments