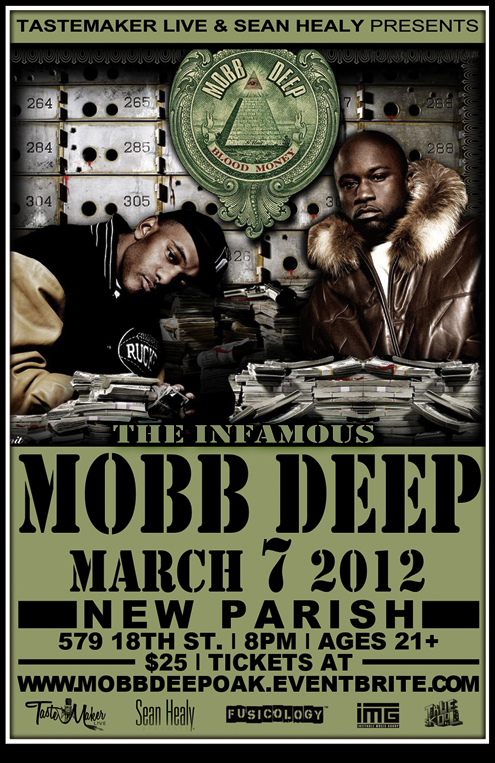 w/ DJ Jack on the decks
hosted by Flossafee

Wednesday, March 7, 2012, New York street rap legends, Prodigy and Havoc, best known to the world as Mobb Deep will appear live on stage at the New Parish in Oakland for a return engagement to the Bay after their first live show in the market since the early 2000s six months ago. Anticipation is high for the return of one of the most revered rap duos in hip-hop history. Fans can expect an electrifying live set packed with East Coast street anthems and definitive 90s hip-hop bangers.

In the mid 90s, Mobb Deep released the seminal hardcore rap record, The Infamous, which spawned the monster hit, The Shook Ones Pt.II. Along with Nas’ Illmatic and Notorious B.I.G.’s Ready to Die, The Infamous changed the landscape of not just New York and East Coast hip-hop in the 90s, but the entire direction of rap music for many years to come. Prodigy’s grim portrayal of the street life and hood in Queens and Havoc’s raw, minimalist and menacing soundscapes became the soundtrack of the concrete jungle of New York City.

In subsequent years, Mobb Deep released the influential Hell on Earth, and Murder Muzik, eventually signing with 50-Cent’s G-Music label and experiencing a resurgence with young rap fans through 2006’s Blood Money. After serving a 3 year prison sentence, frontman Prodigy has written an autobiography about his life, continued to record solo material and rejoined with his musical partner Havoc.

J.J. Tha Wikid 1's new single "Get Up" recently hit number one on The Beach, 562 Live, Long Beach, CA.J.J. Tha Wikid 1's single "Get Up" is strong and showcases his immense talent as a rapper and artist. In 1995, J.J. started writing rhymes as a teen and producing beats in 1998. For several years, he was the producer and a member of the hip-hop group WSM (Wikid Style…See More
Tuesday
0 Comments