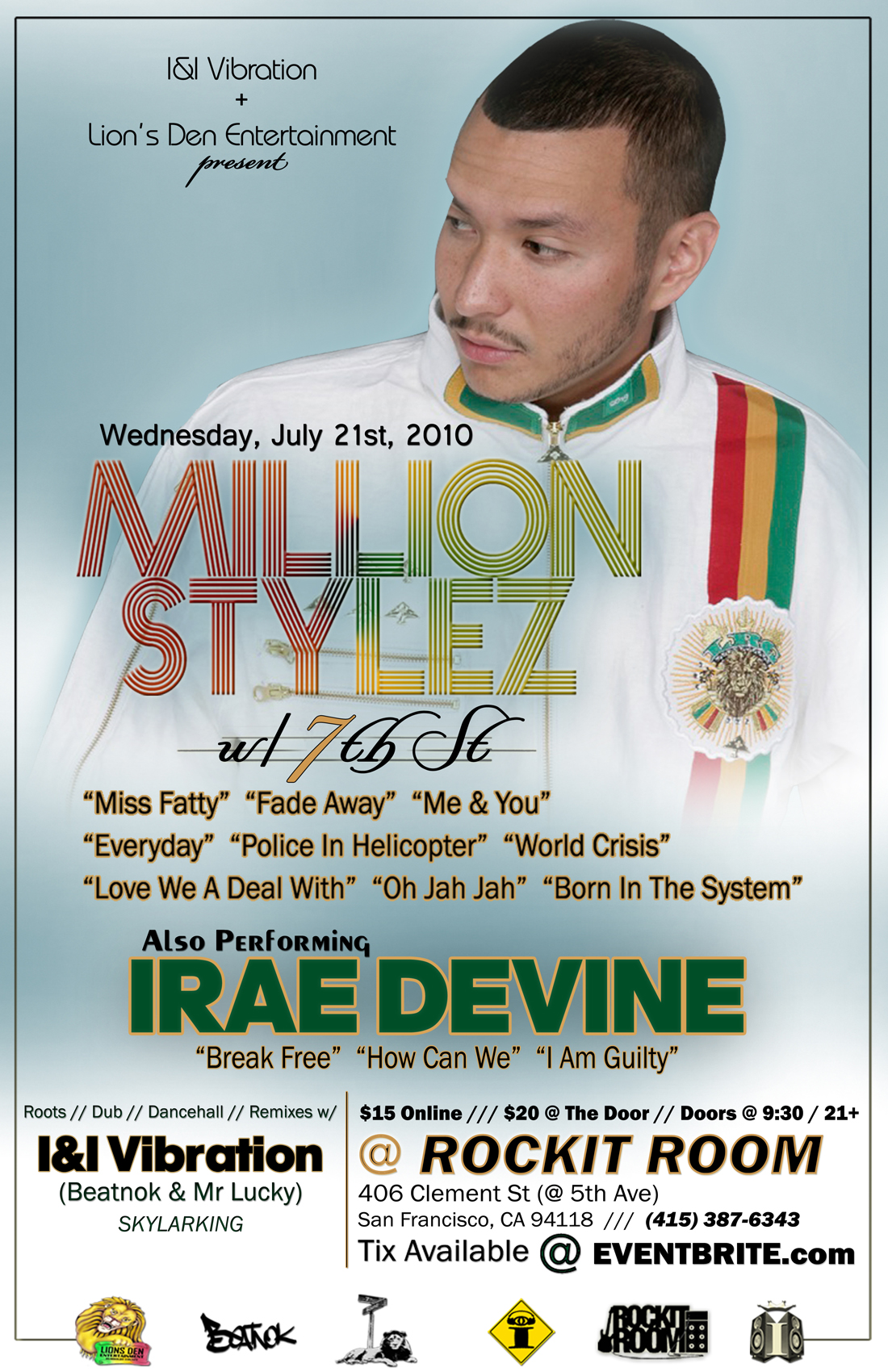 Kenshin Iryo, aka Million Stylez, was born on the first of June 1981 in Stockholm, Sweden. He is half japanese and half French. In that way he says he can feel and relate to people from all over. In the summer of 2005 Million Stylez went to the finals in "Big Break" arranged by Irie FM (Jamaicas nr 1 radiostation) and Red Stripe; an annual talent competition for upcoming artists in Jamaica with more than 1,200 talented applicants. After live shows (in St. Elizabeth, Montego Bay and Kingston) and TV and radio interviews, he ended up in an honorable fourth place. He was also the only non-Jamaican that had ever participated in the competition. 2006 March 1st saw the release of his first single, "Miss Fatty," through German distributor Soundquake, and was their number one selling tune during a long period of time. "Miss Fatty" was also recieved very well by radio stations like Hot97, Shade 45 (Eminem's sattelite radio) BBC1Xtra, Kiss FM, NRJ, Voice, etc. and had been the number one track on Trace TV/radio that covers over 50 countries and opened up all the doors for him careerwise. The second, third, and fourth singles (Brighter Day, Fade Away and Give me the strength) are more conscious because he feels that it is very much needed in this time we are living in today. The video for "Give Me the Strength" is currently being played in heavy rotation on TV channels like ZTV. Million Stylez released his debut album "From A Far" in 2007 on KBC Music, and it includes everything from roots reggae, dancehall, and hip hop, to some R& B-influenced songs; there is even a "crunkhall" remix hidden track (produced by Nordic Steel). Most of the tunes contain conscious lyrics about his gratitude to God the almighty, life struggle, celebration, love and hate, war and peace, and generally about all the issues concerning all mankind. His earlier releases have all been spinning in high rotation on Scandinavian networks such as MTV, ZTV, Voice TV, Voice, Enerj, P3, P5 and also on Jamaican networks as RETV, Hype TV, and Music+, among others. Just to mention few of the artists that Million has worked with, there are big stars like Beyoncé, Loon, Smif N Wessun (Gangsters Prayer), Mr Vegas (Beat Drop pt2), Bunji Garlin (King of socca), Loogaman (Dutty cup), Alozade (JA), J-Ro (Tha Alcoholics), and two of Swedens biggest and most respected rappers such as Promoe (Loop Troop Rockers) and Ken Ring. He has also opened for artists including Sean Paul, Beenie Man, Elephant Man, Ne-Yo, Fabolous, Nina Sky, Ryan Leslie, Fatman Scoop, Wayne Wonder, Mr Vegas, TOK, Anthony B, Ward 21, Alozade, Zumjay, and more. We can also add to the list that he has recorded a whole heap of dubplates for big soundsystems and selectors like David Rodigan (Britains biggest and most known selector), Mighty Crown (world clash champions from japan), Massive B (Hot 97) who also released millions track "Call His Name" on their riddim "No Borders", Sentinel (former world champions), Robbo Ranx and Silver Star(BBC 1extra) plus many, many more. Million is, at the moment, working on promoting his new album (EVERYDAY) while touring all around the world.What more is it to say, Million have million tings a gwaan. Check out his latest releases w/ Don Carlos, Busy Signal, Gappy Ranks, Joey Fever and many more…

Rising Star Yacob has been movin in silence and slowly catching up to his peers withevery release.most notably his smash single Grind featuring Trill Will from Deland,Florida. He is a student of Music Genius of Artist/Producer Collabs the likes ofDrake/40 and Jay-Z/Kanye West. Provin to be the perfect combination of Artistand Producer Effectively packaged in the skin of a social media…See More
13 hours ago
0 Comments