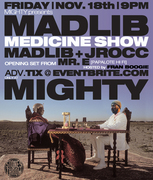 Friday, November 18th, MIGHTY is proud to present Madlib’s Medicine Show with Madlib & J.Rocc. Madlib’s Medicine Show is a 12 part series of albums and mixtapes released through his own imprint, Madlib Invasion, throughout 2010 and into 2011. Odd month releases featured Madlib’s production work, while even month releases showcased his DJ work and mixing skills. Opening set from DJ Mr. E of Papalote HiFi, hosted by Fran Boogie. Advance tickets are now available at medicineshow.eventbrite.com

Madlib, is a Los Angeles-based DJ, multi-instrumentalist, rapper, and music producer. Known under a plethora of pseudonyms, he is one of the most prolific and critically acclaimed hip hop producers of the 2000s and has collaborated with myriad hip hop artists, including The Alkaholiks, Mos Def, De La Soul, Ghostface Killah, Talib Kweli, A.G., MF DOOM (as Madvillain), and the late J Dilla (as Jaylib). He is also the one man force behind the ensemble Jazz collective, Yesterdays New Quintet. Madlib has described himself as a "DJ first, producer second, and MC last", and he has done several projects as a DJ, mixer, or remixer. Madlib has been an influence on an upcoming generation of producers and musicians, many of whom prefer Madlib's abstract styles.

One of the original turntablists, J. Rocc founded the Beat Junkies in 1992 with Melo-D and Rhettmatic, but has done just as much on his own as in a group setting. He began DJing in the mid-'80s with a California group named PSK. Soon after forming, the Beat Junkies became a seminal force in the rise of instrumental hip-hop, including core member Babu plus future stars Shortkut and D-Styles.

Despite the Title, JonPaul Wallace’s Single, “Love’s Not for Everyone,” Defines Contemporary PopDETROIT – After going viral with his rewrite of Lukas Graham’s “7 Years,” JonPaul Wallace has…See More
10 hours ago
0 Comments

PUFFY BEFORE PUFFY: THE GENIUS OF HURBY "LUV BUG" AZOR

When Hip-Hop posses, collectives and cliques are discussed, we often hear of The Juice Crew, The Native Tongues, The Flavor Unit, The Hit Squad or even The Hilltop Hustlers. Rarely is Idol Makers or the man behind that group of artists discussed in much detail.But never forget Idol Makers. The crew consisted of Salt n Pepa, Kid n Play, Sweet Tee, Dana…See More
18 hours ago
0 Comments

Based out of Linwood, Pennsylvania, Bran L is a rapper whose lyrical flair has seen his reputation catapult in 2021. By encapsulating himself within his music, he has captured the hearts, attention, and respect of people across the country, while picking up awards in the process.Citing…See More
yesterday
0 Comments