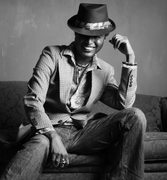 As a child growing up in a small village in Kenya, Sila remembers tuning in to a shortwave radio for the latest pop offerings from the West. By way of a faint, crackling radio signal, Sila first became acquainted with the guttural howls and shrieks of the Minister of Funk, James Brown.

“One of the first James Brown songs I remember hearing on shortwave radio was ‘I Feel Good.’ Growing up very poor in my village and having a song like that play on the radio was very inspiring,” Sila, says.

His exposure to James Brown, along with such artists as the Beatles, Jimi Hendrix and Bob Marley, inspired Sila to pursue music, which he says was far from a well-respected profession in Africa.

Despite his career choice, his parents supported his decision and sold cows and goats to raise money for his send-off to the U.S.

Sila’s pursuit of musical stardom was met with the heartbreak of rejection and he eventually found himself lost, an imposter of sorts, singing pedestrian pop tunes while trying to mask a heavy Kenyan accent.

It wasn’t until he stumbled upon a sold-out show by African artist Baaba Maal at the Fillmore that he realized he needed to change course.

“This was the first African artist I saw in concert singing in his own language. He was so full of life. This was the most touching experience for me and I was almost in tears. I had really forgotten who I was,” he says.

Embracing his African roots and his love of funk, Sila channeled James Brown for inspiration and six years later, with the help of his renowned cast of bandmates, he’s achieved success without having to compromise his heritage (he sings in both Swahili and English) or his musical tastes.

“James Brown has always been someone who’s influenced me quite a bit. From his perseverance to his political life and his very poor background, it’s all been an inspiration to me. … His determination and the fact that he never gave up — I see that in me,” Sila says.

“When I came here I never imagined I would sell out venues and entertain people in a way that James Brown entertained me. Believe me, I’m not saying I’m the next James Brown, but I do feel he’s in the soul of music.” - SAN FRANCISCO EXAMINER

RSVP for Sila to add comments!

MusicDNA is now a member of True Skool Network
yesterday
Welcome Them!

Southwest, GA; based artist Koncious1 started writing music at an early age and that's the way he choose to express himself. Everything he raps about; he's either seen, done, or is doing it. No rap kap! Making Moves Untold Story pt.2 is the sequel to the first Untold story that goes into a little more detail of the life of Koncious1 in the present and past tense... His Story!--…See More
Sunday
0 Comments