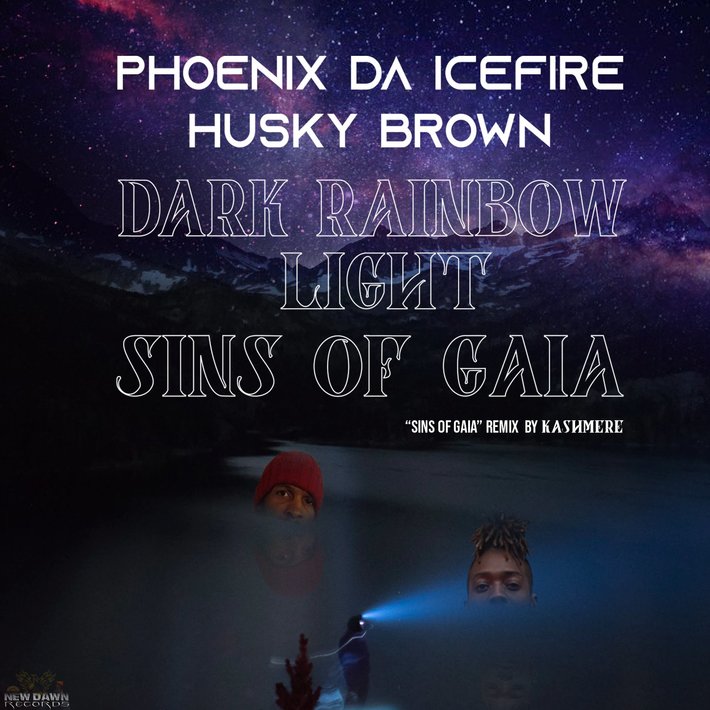 London rapper Phoenix da Icefire & producer Husky Brown drop their incredible new album "Panacea" on May 5th
The themes covered by The Triple Darkness member address the environment, mental health, knife crime, racism, well being and aspiration.  The narrative is delivered with the highest caliber of lyricism and figurative wordplay over a soundtrack provided by Husky which skillfully blends a fresh fusion of hip hop, soul, r&b, electronica, dub and bass.
The second single from the album "Dark Rainbow Light" b/w "Sins of Gaia" released through New Dawn Records today.  Husky laces "Dark Rainbow Light" with some soulful traditional hip hop flavours as Phoenix reflects on the challenges of inner city life while searching a better path, with the lo fi beats of Sins of Gaia paints the backdrop for an attack on institutional racism with the remix provided by Kashmere (YNR Productions, Tru Thoughts, High Focus).
Released today through New Dawn Records, digitally distributed by Ingrooves / Universal and available to stream and download from all the major digital stores and online platforms including Apple, Tidal, Amazon and Spotify
Socials
Twitter @PhoenixDaFire @HuskyBrown @NewDawnRecs
Instagram @PhoenixDaIcefire @HuskyBrown.Official @RealNewDawnRecs

Flashy and confident with a fun delivery expressing happiness through wealth. Living in constant motion in the desperate attempt to escape from the past & moving forward to rejoice the present. Always maximizing a constant effort daily no matter the obstacles in front of you. Seeing every situation as an opportunity to succeed.Click Here to Stream/Download via…See More
1 hour ago
0 Comments

Davonte Elijah Akins (Born December 24, 1995), known professionally as Yung Genesis, is an American rapper, singer, and songwriter from Deland, Florida. He rose to attention in 2019 when he released his Album (All or Nothing). He is best known for his singles, Throw It Back, Bestie, Must Be In Love, Attention, Facetime, and more. He was five years old when his father…See More
yesterday
0 Comments