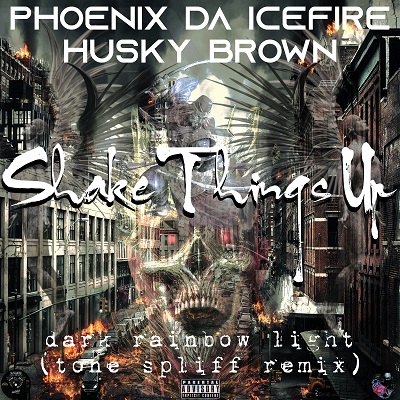 Released in May 2020, "Panacea" by London rapper Phoenix da Icefire and producer Husky Brown was nominated for "Best Independent Album" at last year's AIM Awards.  Postponed due to the pandemic, the rescheduled launch event takes place at Brixton Jamm on Friday November 12th as a joint headline with fellow London rapper and producer Ramson Badbonez who will be showcasing tracks from his recently released album "Lead by Example", both out on New Dawn Records.
This new AA side single by the duo has been released today to mark the event.  The Schifrin-esque soundtrack of "Shake Things Up" fuels a barrage of high octane bars unleashed from a fully loaded verbal armoury, while a sublime blend of choice beats and turntablism laces the specially commissioned remix of "Dark Rainbow Light" courtesy of prolific US producer and DJ Tone Spliff whose multiple credits include work with Recognize Ali, King Magnetic, Ruste Juxx, Melly-Mel, Vic Monroe and many more.
Event details at www.gigs.hiphop
Available on Spotify, Apple, Tidal, Amazon & here on Bandcamp

New Artist Jay-Em charts a recent single, “Po-Po” in the Top 200 Hip-Hop charts. Landing at #21, this is his first time on the charts, although we are sure more is to follow. Jay-Em sold more copies than 179 mainstream artists and their label counterparts. Especially as a fully independent artist, this is an outstanding accomplishment.Upcoming hip-hop artist Jay-Em…See More
3 hours ago
0 Comments