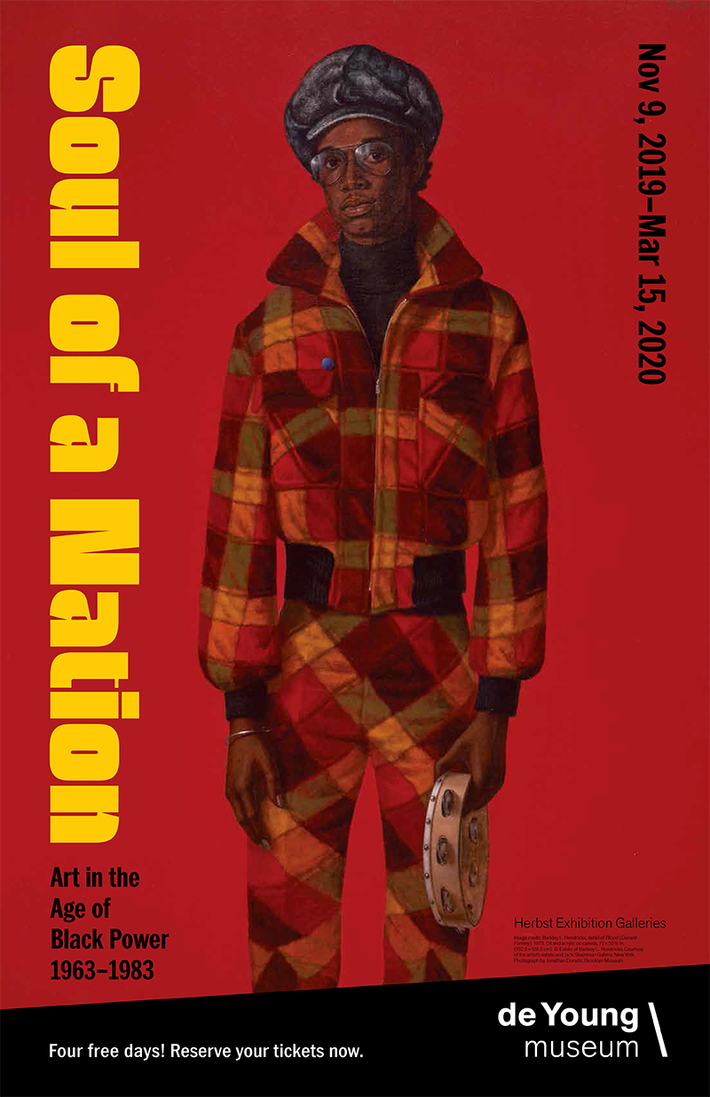 Reaffirm the Right to Gather Publicly with Souls of Mischief

The Age of Black Power exploded into political consciousness when groups of marginalized people assembled to assert their right to exist in their own communities. People of color could not gather and demonstrate in a public space without the threat of the government labeling them as subversive; the government would later go on to murder many of these men, women, and children for their beliefs. Today, this is still an unfortunate reality for many.

In response, the Souls of Mischief crew have designed a special day of events hosted in our public space, the de Young, reaffirming the right of communities of color to gather publicly in the Bay Area and beyond and proving that public institutions belong to ALL the people.

Ticket Information
General admission and special programming is free on Saturdays at the de Young and Legion of Honor for all residents of the nine Bay Area counties. Admission to the exhibition, Soul of a Nation is free on the second Saturday of each month from November through February.

Tickets do not guarantee entry to screening. Seating for the screening is limited and first-come, first-served. Seating tickets will be distributed an hour before the event begins in front of the Koret Theater.

Hip-Hop Artist, Swazey lands a deal with New-York label, EQSwazey AKA Hef Swazey was born Rafiq Hawkins 09/15/1995 in Washington DC, with 10 siblings born to a poor working-class mother, in the inner cities of Washington DC. At the tender age of 12, he decides to leave his home to pursue his music career in rap. He's extremely talented and focused with a determination to win and never settle. This disposition earned him a lot of respect and recognition within his community and his social…See More
8 hours ago
0 Comments

As we arrive at the festival weekend that should have been, we are missing the magic of artists and fans together in the park now more than ever. In the…See More
18 hours ago
0 Comments

OOOJordan, Loki952 & OOO Andre link up to bring you a hot new joint titled "Never". Check it out below and make sure you follow them on social media for their latest releases.Connect:https://www.instagram.com/jordanmbeatz…See More
21 hours ago
0 Comments

p33di - I'm Da ManSouthern rapper p33di drops hot club track ‘I’m Da Man’ JACKSONVILLE, FL – An artist from the Deep South is making a name for himself by creating up-tempo club music with a twist for a new version of Krunk. His name is Pierre Janvier but he goes by the stage name p33di, and his latest single “I’m Da Man” is the perfect kind of banging beat that the…See More
yesterday
0 Comments

Joe Boii, coming straight out of the South’s hot spot of talented artists, this Mississippi native never fails to disappoint his audience. This well thought out EP explains a journey, a life, that has been lived and survived through. His catchy hooks, crisp beats, and the lyrics that flow smoothly over it all, is one for the books.Go check out If Only Time Could Tell on…See More
yesterday
0 Comments

Kenji The Barber Releases New Music in a Birth Vlog!Kenji The Barber takes a dive into the music industry! With his latest single- he dropped with over 4k views for his next hit single on Youtube, Kenji has an ear for good music! With him being a great barber, he also has good taste in music! Kenji, an artist from Hampton, Virginia, dropped his birth vlog of his newborn baby K3 …See More
Wednesday
0 Comments