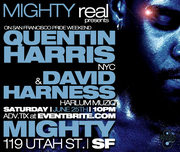 In the hermetically sealed world of dance music, where genres split tangentially with regular and bewildering regularity, there are a few whose music is expansive enough to cross barriers, ignore micro-idioms and appeal to many. Quentin Harris IS one of the few.

“I’m proud of the fact I wake up each morning to a job that I love doing; one that touches people in so many different ways,” states Quentin. Indeed he does. Quentin’s name has been on the lips of many since hearing his midas touch on Donnie’s “Cloud 9” and hearing his original productions, like the timeless “Let’s Be Young,” which blew up over five years ago. Since then it’s been an endless whirl of global DJing engagements and many hours acquiring a studio tan in the service of some of the best house music to be heard in quite some time. Some say he single-handedly rejuvenated the house music scene.

Quentin Harris has become one of the most in-demand remixers in the world, adding necessary club sheen to R&B vocals, house tracks and frequently turning the proverbial turd into a polished diamond. No wonder he’s been called on to remix everyone from Justin Timberlake and Mariah Carey to Femi Kuti and Blaze. In addition to “Don’t You Forget About Us” from Mariah, and “Not Like Crazy” by Jill Scott, one of his benchmark rubs was a sneaky re-production of Leela James’ “My Joy”, transforming her dynamite blues jam, into classic deep house. He says he never thought it would cause such a splash. “I had no idea that “My Joy” would turn into what it turned into. The records I really loved and had the most fun working on, like Justin Timberlake’s “What Goes Around,”, stayed under the radar. You know, I never know. I just do what feels good.”

Harris’ success has been built on the rare ability to straddle genres effortlessly, with productions that gracefully sit between the soulful end of the Shelter and the tougher sound that many European audiences demand. Danny Tenaglia called it Hard and Soul and Quentin surely lives up to it. “I go out and listen to everything even if it’s not my scene,” he states. “For instance, Victor Calderone is a good friend of mine – and even though I won’t necessarily love everything he plays, I do think it’s important to go out and hear him play. I love to go and get out on the floor with the crowd; not hang out in the booth. When I hear a record and it really really catches my attention, I get crazy about it, and then I’m like, Ok that’s the record of the night for me, I’m gonna go and find out what it is and then go home.”

David Harness is one of the most popular DJ/producers in the San Francisco Bay Area club scene. He has been described as ‘a man who lives, breathes and emanates everything that is beautiful about deep house music and classic garage.’ David is considered a ‘rising star’ within the dance community. To date, David has worked on projects featuring artists such as Mary J. Blige, Luther Vandross, Aretha Franklin, Simply Red, Alicia Keys, Floetry, Donnie McClurkin, India Arie, *NSYNC and Donnell Jones. A collaborative effort with DJ/producers Chris Lum of Abitare Music, Jay J of Moulton Studios, and Charles Spencer of LoveSlap has resulted in several independent releases. David has appeared in articles and interviews in Billboard Magazine, Paper Magazine, Surface, XLR8R, Streetsounds, Sweater, HX, Next, URB, DJ Mag and the SF Bay Guardian. David Harness’ passion, talent and creativity has definitely created a new page in the history of house music.