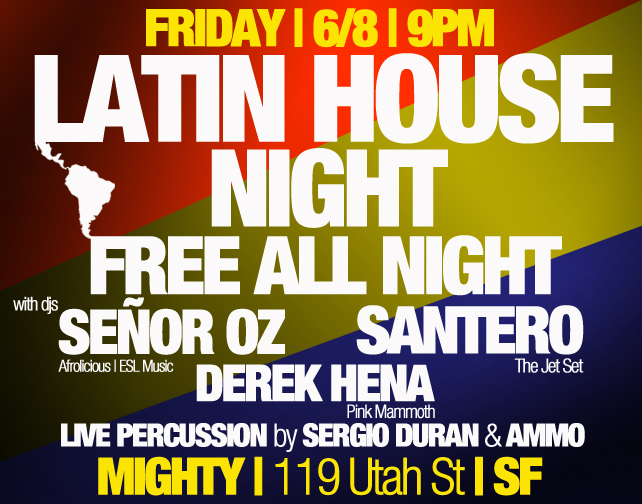 FRIDAY, JUNE 8
Mighty presents
LATIN HOUSE NIGHT
FREE ALL NIGHT
Mighty is proud to bring the Bay Area its first premier Latin House Music night and for the special inaugural occasion is FREE ALL NIGHT! Señor Oz, Santero, and Derek Hena will be playing this subgenre of house music that blends house beats with Latin American music such as that of Brazilian, Cuban, Mexican, Dominican, Puerto Rican, and Columbian. Of recent African rhythms have been infused into Latin House music making it a very versatile sound for dancers and music lovers from all walks of life. With the Bay Area's diverse ethnic community, Mighty's Latin House Night or Noche de Casa Latina invites music lovers and dancers to experience what is quickly growing and becoming the hottest and newest innovative dance music.

Live percussion by the acclaimed
Sergio Duran and AMMO!

San Francisco based dj Señor Oz has been rocking dancefloors from Rio to New York City since he started DJng as a high school kid. His eclectic selections mix up dance music from genres ranging from funk,Afrobeat, disco, house, Latin, Hip-Hop and reggae, the unifying factor being the breaks that make the party move. As a tastemaker, producer and promoter he has helped garner worldwide respect for the Afrolicious party he started and has gained critical praise for his remixes that have come out on Six Degrees Records and Akwaaba Records and his mixtapes and original production.

Santero comes from a long family tradition of Latin musicians and Sonidero sound system deejays. He was raised in the mountains, jungles and Atlantic coasts of Central America where he travelled extensively from Guatemala to Panama performing with his father’s Salsa & Cumbia bands. From the ghettos of New York and New Orleans to the barrios of San Francisco and Los Angeles, Santero refined his sonic palette and delivery by performing relentlessly in nightclubs, warehouses and on street corners. Drawing from such diverse musical influences as Reggae, Jazz, Punk, Funk and Hip-Hop, Santero incorporated his traditional Latin upbringing with these western music styles and developed his own brand of international fusion beats. The third album by Santero, entitled Afrika (2011 City Hall Records/Round Whirled Records), is an exploration of the impact African rhythms have had on the music of Latin America. Funky Afro-Beat drums, poly-rhythmic Couper Decaler dance beats & Angolan Kuduro styles blend with Latin percussion & call and response vocals.

Chuck D leads a host of rap stars in this account of Hip Hop’s origins. Their memories of growing up in 70s New York portray a divided city mired in crisis. Yet it was the most oppressed neighborhoods that fostered a creative spirit that spawned…
15 hours ago
0 Comments

​Being certified in anything means you have mastered the skill you worked hard to be the best at. To hustle is to grynd and to grynd is to be successful. So, when you think certified you think successful. In order to get there, you have to go through pain and struggles not everyone is prepared for.Laurel, Mississippi artist Shayne Kobayne has been pushing the envelope of grynders for years. This means everything he works for comes from the muscle…See More
16 hours ago
0 Comments

2 events by Editor's Pick were featured
20 hours ago

Skweeze Get’m Drops solo WOOFER-BANGIN’ Track On his birthday! Cresson, PA — Friday, September 17th, 2021 — Since the separation of long time partner ‘Cam’ he has been busting his butt to create top-notch tunes. The sound has never been so textured and animated. The track is available on all platforms, through WORLDSTAR’s Distribution it is sure to heat up the fans.September 17th, ‘Last Joke’ goes live on all platforms. It is one of many tracks that Get’m will be dropping over the next 3 years.…See More
yesterday
0 Comments

Brooklyn raised Cadillac Rah drops a hot new single “What She Wants” featuring Diop’s Chord. These two artists came up with the concept of the song based off of past relationships. Incorporating their pain into vocals and instruments, helped allow their audience to connect to the song. They wanted their lyrics to speak to everyone and hopefully enlighten people. The…See More
Monday
0 Comments