The album was originally announced in 2016 with the release of the J Dilla-produced single “Nutshell.”
After four years of holding tight, it appears we’re far closer to a posthumous Phife Dawg album than any of us could have imagined.

According to a tweet from A Tribe Called Quest (see below,) the project is set to arrive in early 2021. “Know that early next year you will all get to hear a new Phife album,” wrote the group on Twitter this afternoon after announcing a new tee from Phife’s estate. It’s a welcome update on the project (on what would have been the rapper’s 50th birthday, no less,) which was originally announced just weeks after Phife’s death in 2016 with the release of the J Dilla-produced single “Nutshell.” Since then, there’s been virtually no mention of the project (initially titled, Give Thanks,) or a pending release date.

Though he passed in 2016 from complications with diabetes, the rapper was prominently featured on A Tribe Called Quest’s We Got It From Here, Thank You 4 Your Service, which served as both the group’s final album and a proper tributary send-off to The Five-Foot Freak. The group continued their celebration of Phife during their 2016 appearance on Saturday Night Live, performing in front of the rapper’s image on an episode hosted by Dave Chappelle. Earlier that year, Phife was remembered by contemporaries and several generations of hip-hop royalty at a memorial service in The Apollo Theater. The service featured eulogies from Q-Tip, André 3000, Busta Rhymes, and Kanye West, as well as performances from The Roots, D’Angelo, and more. Tribute also came from those who weren’t able to attend, including Kendrick Lamar, who got a whole stadium to chant Phife’s name during a show. 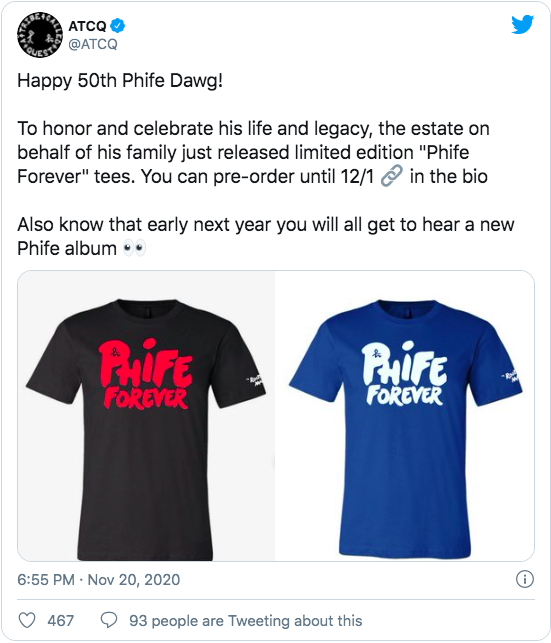