D-Nice, Questlove & More: Here's a List of Every DJ Stream That Has Been Keeping us Sane During Quarantine 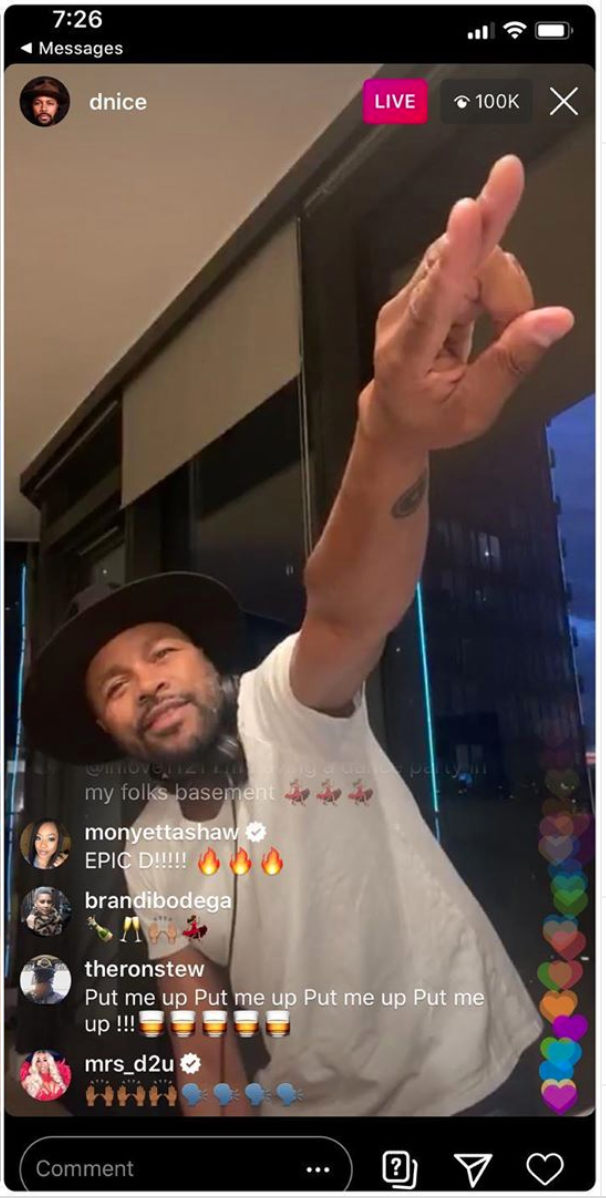 It’s not just D-Nice. Over the last week. numerous DJs, producers, beatmakers, and artists have been streaming to the world from their living room. Here are some set mixes you can check out.

In the wake of the outbreak of COVID-19 (otherwise known as coronavirus) governments and health organizations around the world have called for people to help prevent the spread of the virus by staying in their homes and avoiding large public gatherings. This practice of “social distancing” has obviously had a detrimental impact on the live music and nightlife industries.

As a result of this shocking turn of events, an untold number of nightclubs and venues have been forced to close their doors leaving DJs and beatmakers with no place to play and party-goers with no places to party. Utilizing common audio and video technology, the music community has responded with many DJs and beatmakers opting to stream their live mixes and beat sets from the comfort of their own homes.

No one has capitalized on this trend quite like legendary DJ D-Nice.

He started on Wednesday, March 18th. He took to his Instagram for Homeschoolin’: Social Distancing Dance Party, a 9-hour marathon mix of jams, ranging from ’80s R&B to contemporary rap. D-Nice then followed it up with Saturday’s mix, dubbed #ClubQuarantine. He started spinning at 3 PM PST and ran for nearly 10 hours, drawing a massive crowd of pedestrian and celebrity traffic, with everyone from Michelle Obama to Janet Jackson to Bernie Sanders to Stevie Wonder tuning in. That night D-Nice cracked 100,000 viewers.

He then returned for a set on Sunday. This time cracking over 150,000 viewers and seeing his Instagram break a million followers. (When he started he had about 200k followers.) He also got glowing write-ups in the New York Times and the New Yorker. D-Nice’s IG has emerged as the preeminent live-streaming dance party in the world.

But he isn’t the only one. Over the last week. numerous DJs, producers, beatmakers, and artists have been streaming from their living room on Instagram, Facebook, or YouTube. (In fact, Sunday, March 22nd, saw legends like Questlove, Just Blaze, DJ Premier, Nice, and more stream at the same time.)  If you are going a little stir crazy — and who isn’t — here are a few dope mixologists that have been streaming during these trying times.

Hopefully, they will continue to bless us until this passes.

Inspired by D-Nice, Questlove went to his Instagram Live and spun slow jams for nearly four hours. Quest dubbed the session #QuestLoversRock, and even rocked a Sade-inspired sweater in the process. (The sweater was designed by Nan. You can cop it here.)

Atlanta-based Rapper, Damien Sane is taking the Independent Underground by Storm When you're a living confirmation that “Scars are proof that you’re stronger than what tried to kill you“ - your next move should be your best one. Born in Anniston, Alabama, Damien Sane is an intimately-layered artist with a message for Hip-Hop. During his career, he has managed to release several singles like "Man Named Marty, Hostile (feat. Allen Boi Yo & Tre Fre$hman) and Never Doubt Me (feat. Tre…See More
Tuesday
0 Comments

For Immediate ReleaseDoe Boy Jones – Reality Crack Part 2 is a sequel to his last project Reality Crack Pt 1, which was released in July of 2018. This project is greatly anticipated by many different entities including radio stations who are already breaking his two lead off singles, “In My Feelings” and “Doe Lenin”. Doe Boy has definitely built up a buzz and has released his 13 song tape via distrokid on April 2, 2020. Make sure you stream it when it is available. These songs hit hard and will…See More
Sunday
0 Comments